Birma is very different to other SE Asian countries. Road conditions and the buildings in Kawkareik immediately suggest that this is much poorer country than Thailand. It is a military state. The new, military-controlled government shifted the Capital to the new city named Naypyidaw (it actually happened in one day – all archives and documents were transported from Yangon in one big escort). The country is divided into regions and each region has its own army on top of the country army. There are police patrols every 10-15kms and ahead of each bridge. When you visit the country, you can stay only in selected, registered hotels and camping / hosting is illegal. Toursts are safe, but apparently the freedom of people is constrainted.

While crossing the border on the bridge, I saw many Burmese people who crossed it illegally on boats. Later that day, I was talking about it with an American woman who volunteers in Mae Sot. She explained that Burmese need visas to live in Thailand which are hard (or expensive) to get so they risk and live in Thailand illegally. When they are arrested, they hve to pay a fine what they cannot afford, so they are deported back to Birma. Then, they again cross the border illegally 😀 It is a risky game – you can end up in prison for several years.

I stayed in Kawkareik for half a day. 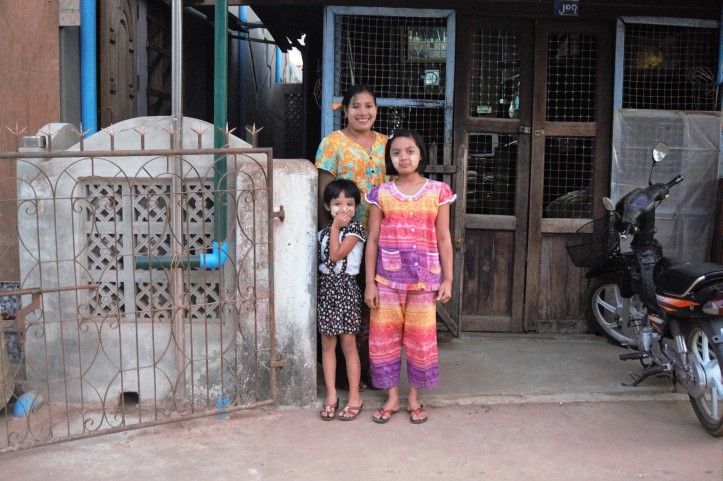 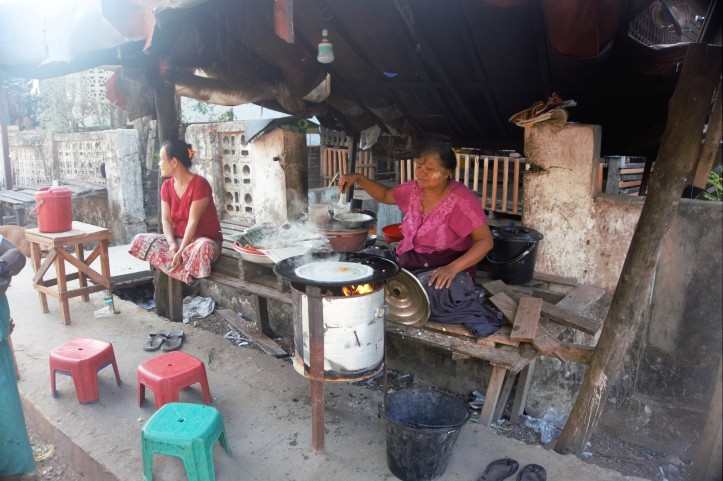 The next day I cycled to Thaton. I started the day with the breakfast on the street. Something similar to pancakes for $0.5 😉 Contrary to accomodation, food was still cheap in Myanmar.

The road quality was bad, but the surrounding was one of the best in SE Asia – a pristine piece of land.

When I stopped at a shop next to the road, the kid came to me and brought me a piece of watermelon – I was very happy, because it would be too big to take on a bicycle and one piece was perfect.

I saw small hills from the road. I was so glad I did not have to pass by them 😉 Back then, I was still fat and while cycling on a flat road was completely fine, climbing was a real trouble for me. [photo]

I decided to make a short break at a small waterfall. Local people made there a swimming pool. I attracted a big attention after taking off a shirt – my body and hands looked like Polish flag:”tak jak kolor znanej flagi – white-red, red-white”.

I arrived late to Thaton and went out to visit a local temple – a pretty big one and a very gold one 😉 After coming back to the hotel, I was sure that I will make my Indian eVisa application. The internet was so slow that after 4 hours I still could not process the payment. I was super pissed off. At least I managed to pay for my flight out of Birma to Guwahati in India.

The next day had to be a short, chilling-out day. Just 100km and nothing more. Unfortunately, after arriving to the hotel, it turned out it cannot accept me because I am a foreigner. Where was the next hotel? 40kms more using a shortcut.

I write “countryside” it in brackets because for me all Myanmar is one big countryside – or even wilderness side. Adventure seekers should feel very good here. At least as long as they will not cross to the restricted area and be deported. One guy did it last year and because of his actions – and few other circumstances (read it “immigration issues with Bangladesh”) – Birma decided to close the land border crossing with India. This is why I had to take a plane over the border. I am lucky that I love flying, airplanes, airline industry and all of this air-something stuff 😀 Usual cyclists does not like flying.

After battling the shortcut, I arrived to the small village with the only hotel in the range of 40km. They asked for $25! In Cambodia, the same place would be max $10 – it had A/C and they served a brekfast so it was not so bad, but still much more than it would be in any other country. I went out to the main street for a dinner and got what you can usually get in rural Myanmar – rice and chicken. Burmese couisine is poor. Very often they will serve you an instant Chinese noodle soup with an egg or something similar and propose an energy drink. There are many differend kinds of energy drinks price differentiated. All produced by Coca-Cola. At least food is cheap.

The following day was a day of arrival to Naypyidaw. I was very courious what I would see there.

Ther were many standings along the road collecting money for some goals. No idea what goals, so I have never contributed. The help should be wise. It cannot be just help, it should act as an impulse for the change.

And finaly the capital. The gost town. I felt like all this huge roads were prepared for me to cycle :D. There was a cycling prohibition on a highway, but given that the traffic density was 1 car per minute and it had 4 lanes each side, I did not care.

I paid for my 2-star hotel $25. The same as for a shitty guesthouse in a village a day before. I even do not comment 😉

While getting out of the city, I decided to camp to reduce the spending on accomodation. It is illegal but one time should be fine. On the way out, I took the highway and met a driver who was very happy that I am visiting his country 😉 He advised me to not take the highway as this is a very important road in Myanmar. I did not listen and after maybe 30 kilometers I stopped for a break and met policemen 😉

At this top received the most beautiful smile in SE Asia.

After a while the policeman started following me. After another 20 kilometers two policemen and a translator (sic!) stopped me and proposed to give me a lift to the exit because this is not allowed to cycle on this very important road. I agreed because it was really boring to cycle there.

I finished a day cycling in a very picturesce area. I still did not learn how to use my tripod so I asked a Burmese boy to make me photos – he was very happy that he could help me 😉

Finally, after the sunset, I decided to find a place to camp. I have just taken the first side road and ended-up on the edge of the field.

Few hours of very pleasant cycling on a hilly road next and I was in Bagan.

You feel it is a touristic area. On one hand, I do not like places like this – more expensive with less friendly local people. But I really liked Bagan with its temples and balloons. It is a must-see place in Birma.

You can rent an e-bike to visit all temples for $2 but the most popular is to find an open temple, climb it and see a sunrise with balloons and a sunset over Bagan. I met there two Polish travellers – Tomek and Kornelia – who were in Bagan for already 4 days and they shared with me a location of the best spot for watching sunrise/sunset. Thanks again for all help 😉

I also met a cycling couple – Naoki from Italy and Sori from Korea. They helped me preparing my Polish flag – thanks and good luck on your next cycling trip 😉 You can follow them here:

To finish my SE Asia stretch, I decided to take a boat to Mandalay. From there, I had to take a flight to Guwahati in India (with two stopovers in Bangkok and Kolkata – I mentioned that I love flying 😀 ) with AirAsia and IndiGo.

Mandalay was completely rebuilt after WWII but they managed to restore the old city centre. I did not see it because the ticket was $8 and I thought a pizza is a better investment 😉 At least I visited the oldest and longest (?) teak bridge in the world.